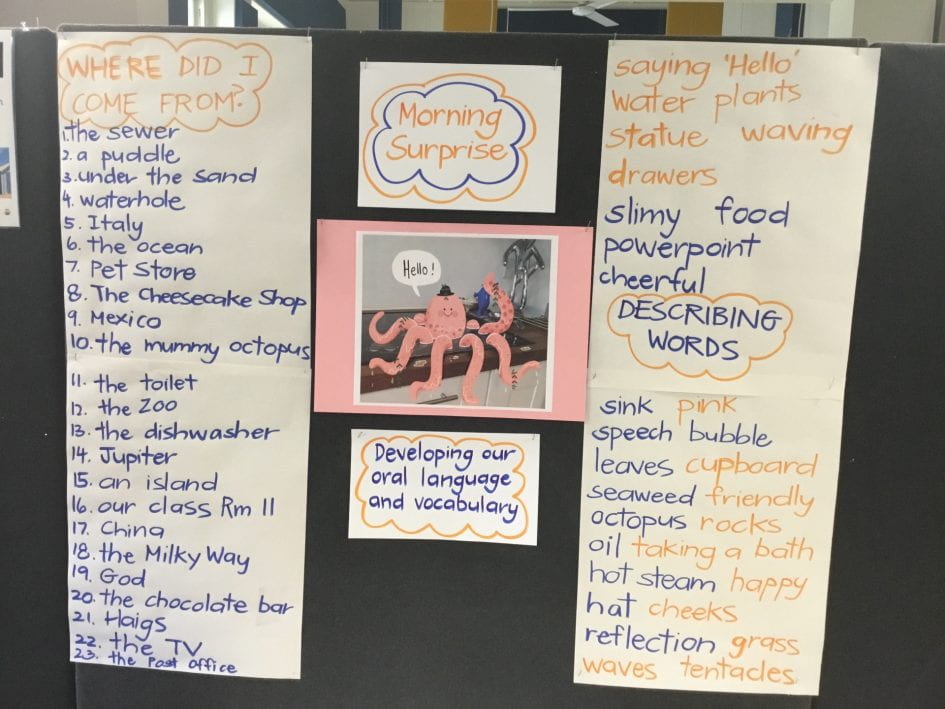 The Year 1 students in Room 11 are developing their oral language skills and growing their vocabulary in our English lessons. With this ‘Morning Surprise’ image as a stimulus, they brainstormed describing words, suggested ideas of where the octopus may have come from and transferred their ideas to writing. We are happy to share some of their thoughts for you to enjoy.

TOBY I wake up with the sound of kersplash and I rush out of bed and run down the hallway. I run into the kitchen and guess what a pink, friendly octopus is in the kitchen sink saying hello and wearing a hat.

ZARA Splash a little girl woke up from a splash! Out of the toilet came a slimy pink octopus. Ahhhhhhh! Mum and Dad an octopus just came out of my room! Splash!

OWEN Bang! Deep underwater an eight tentacled octopus landed on a ledge on a canyon. He looked deep down on the ocean floor. All he could see was a black rock and dust. He had never seen sunlight because he had never looked up and he is 1000m under sea level until – now something rushed up…

EVIE The octopus did a big jump out of the sea then the octopus found a big sink full of water. Then one day the slimy octopus was throwing his tentacles everywhere and wished that he was back in the ocean eating crabs.

FRANK When I went into the kitchen my pet octopus was having a bath in the sink. Splash went a heap of water! The octopuses name was Ocy and he was a boy octopus that is super dooper friendly.

HARRY I woke up this morning and I heard something SPLASH! It was an octopus in the sink.

EMILY Splash went the octopus crashing its tentacles and scraping its arms with a slimy hello!

LIAM Splash! An octopus appeared in the sink it was big and slimy and pink and it had a hat on. A boy came he said Ahhhhhh there’s an octopus in the sink mum. 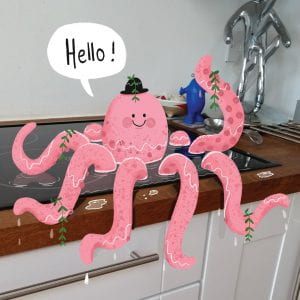