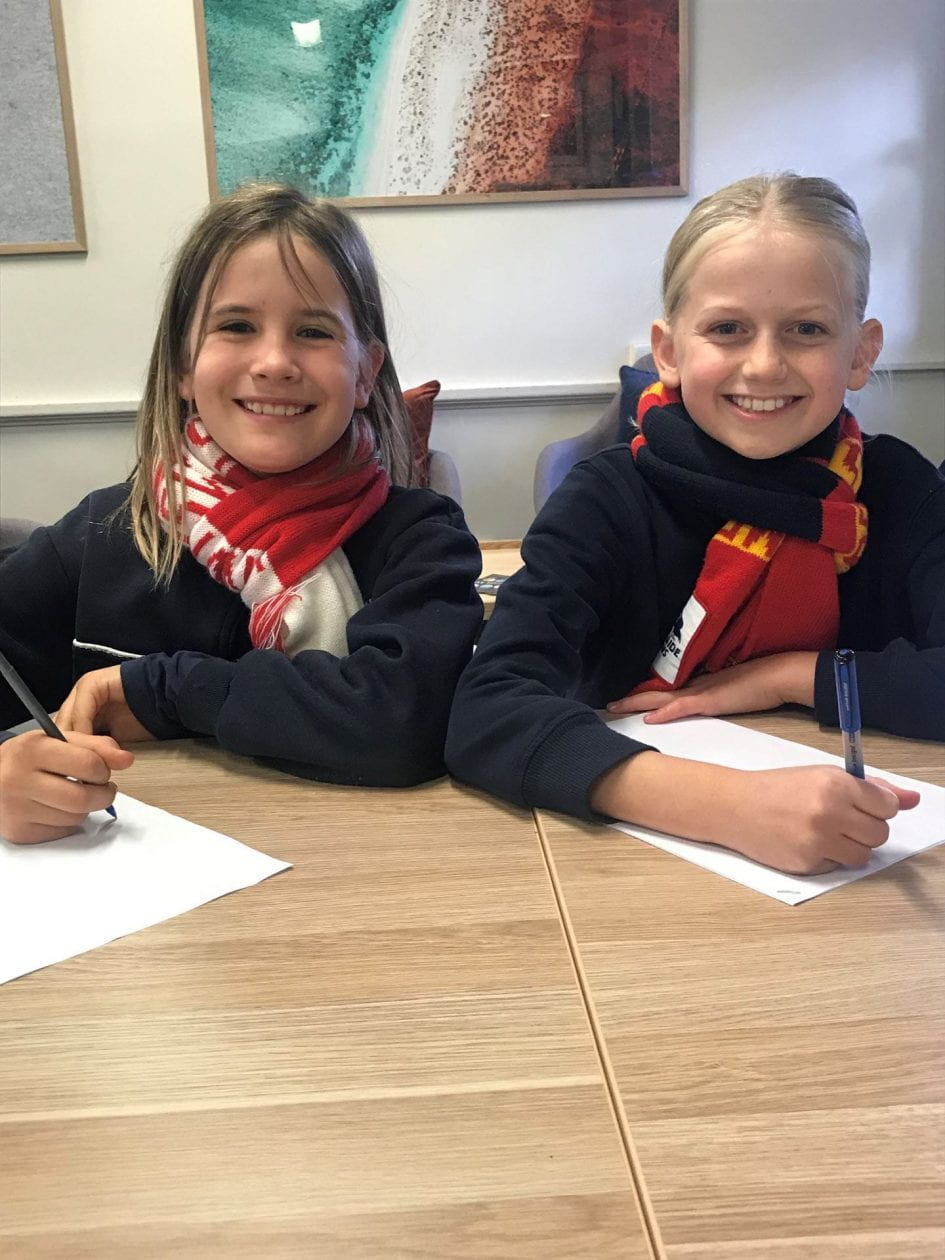 In continuing with our publication of students’ writing across the years, we are pleased to share these short story narratives from Imogen and Scarlett in Sarah Bullen’s Year 5 class:

Greta ran onto the playing oval, still alight with rage, and stopped only when she stumbled on an abandoned soccer ball. She was the goalie for her team, and she had let the ball through to the net at the last twenty seconds of the grand final, leaving her without a trophy, and only glares from her teammates and a participation certificate.

She picked up the ball, and began to play by herself. She booted the ball up, down, left and right. Suddenly, a mocking, giggling sound startled her. She spun around, and saw the other team’s star players, their names were Beth and Violet, if her limited knowledge of the other team was correct. Beth pointed at Greta, then whispered something in Violets ear and they both laughed and ran off.

She felt her cheeks glowing red with shame and the paused. She ran over to the ball, and, blinded with rage and wild with fury, kicked the ball way up high, so high that the ball sailed into an open window of the sports centre. Greta felt hurt and angry. She was such a bad player that she couldn’t even kick a stupid ball right.

She picked herself up and and ran through the automatic glass doors, up the stairs, and into a store room and found the ball sitting on the floor. Greta walked over to it, slightly pleased that it hadn’t disappeared, and then she heard a click. The door had shut behind her.

Greta ran over to the door, and furiously jiggled the handle. Oh no. This couldn’t be happening. She tried again and again, but it was no use. She was trapped. She sat down, any pleasure that was left inside her was long gone. She felt in her pocket for her phone. Oops. It wasn’t there. Her phone was in her locker, along with her water and her bag. She banged her head against the wall in frustration. All she could do now was wait to be rescued.

Over the next couple of hours, she came up with a few ideas. She could abseil down the building with a rope made of bandages from the first aid kit? Greta peeped out the window. No, that would never work. She was three stories up, it was too dangerous, and any way, the window was big enough for a ball, but not for a twelve year old girl. Greta’s shoulders slumped. Storerooms should really come with an emergency exit plan.

She looked outside. The sun had set, and rain was pattering on the window. The room began to grow colder and colder. She checked her Fitbit. It was eight o’clock.

The rain that had been gently spitting on her window had now started to lash out against the glass, causing it to shake. By now, she could barely see her own hand in front of her. Then she had an idea. She felt in her hair for a bobby pin, located one and stuck it in the lock. She wiggled the pin around and there was a Greta burst out the door, she felt as if she would self destruct with happiness. Grinning, she sped downstairs, rushed over to her locker, and grabbed her phone. She quickly dialed her mums number. “Hey mum,” she said, “you wouldn’t believe what just happened!”

Carrie jogged onto the road,  still radiating with fury, and only stopped when a car zoomed by. She blinked, stumbled onto the footpath, and collapsed her rage forming into hurt and disappointment.

Carrie had been kicked off the chess team. When her so called “ best friend” Lucy, had decided to join she was pumped, only to realise that Lucy was there to replace her.

Uh get up Carrie. Go for a run. Get your energy out. Carrie jumped up and sprinted for five minutes straight, thinking about how unfair life was. When she stopped she realised she was lost. Really lost.

Carrie felt her pocket for her phone. Oh you idiot Carrie! Mum told you to never run without your phone! Carrie looked up and realised it was sunset.

She looked at her Apple Watch. The time was flickering feebly. Carrie just made out the time before the watch went dead. Carrie shivered. It was much later than she anticipated.

As Carrie ran onto the road. She wasn’t looking at the path ahead of her and suddenly tripped over a speed hump. If Carrie could see in the dim light she would have been repulsed by the cuts on her arms. Carrie looked up and saw  a dirty van pull over, and a creepy man come out. Carrie’s eyes widened and bolted onto the main road. This time full of terror. She felt  raindrops begin to fall and tears filled her eyes as she ran through the rain. Carrie searched for an open shop.

The Seven Day Supermarket? No! The Shoe Shop? No! The Hairdresser? No! Carrie felt the tears run down her face. Thunder boomed loudly and Carrie could faintly hear the sound of her least favourite McDonalds advertisement play. Just the time to play it- she thought. Her eyes widened. OF COURSE!! Carrie turned around and rushed into the McDonalds drive through. Something caught her eye. She turned and saw her dad! Stuffing his face with fries!